Surgery Is A Great Way To Stop Drawing Comics Twenty-six years ago, I dislocated my right knee while we were on a family vacation in Colorado. After the initial dislocation, it seemed to be better. I wasn’t running a marathon or anything, but it was okay to walk on. Several days later, we stopped for an attraction and I found I couldn’t get out of the car. My knee was stuck bent. My memories that night at the ER in Colorado Springs are a bit hazy. But I remembered what the nurses and doctors told me they were going to do. My cartilage had inflamed so much that it had locked the joint up. So. They were going to put my leg in an immobilizer.

“Sounds great,” I said, “how are we going to loosen my knee up enough to get it straight?”

I screamed through several of them pushing my knee straight. I felt all the cartilage pop out of the joint. They gave me some codeine and off we went. I was pretty much in a codeine haze for the trip home in the back of a car.

After I healed, I had to shave my knee, cover it with chemicals, and tape my knee cap into place. For the rest of my life, I have had to push a stray piece of cartilage back into place. It popped out every time I stand up or sit down. About two months ago, that piece of cartilage transversed to the other side of my knee. It was too painful to do much of anything.

And it wasn’t cartilage. It was a piece of bone. About one inch long. Must have lodged loose sometime either from the initial dislocation or in the ER. I finally had surgery to have it removed in August. The doctors couldn’t believe I’ve lived with a piece of bone floating in my knee for so long.

June through August has not been very productive. I haven’t been able to walk. I couldn’t sit for a long period of time. As soon as I made it home from work, I was icing my knee. It’s been frustrating. I did have it drained and got a shot of cortisone after my initial diagnosis. But man, it still hurt. I was excited to have the surgery.

Summer wasn’t all bad though: my guest stint at O Comic Con was a fantastic time. It was so much fun meeting local fans and making new acquaintances, such as David DeGrand, another SpongeBob cartoonist. We did a fun SpongeBob panel together which was moderated by the fantastic Jerry McMullen of The Worst Comics Podcast Ever. David’s work is fantastic; check it out.

And, I was able to help friend and mentor Phil Hester with his 100 Kirbys auction for the Hero Initiative. Though I was a part-timer at best. The real inkers/heroes were Eric Gapstur, Bruce McCorkindale, Fredd Gorham, and of course, Ande Parks. I was still in a great deal of pain though, and I’m afraid I wasn’t much help.

Post-surgery has been strange. My knee feels right for the first time in years. The mechanism works. But it was still surgery. So it’s stiff. I have a few more weeks until it’s completely healed. But I’ve been walking on it since the second day after surgery unassisted. I’ve been able to sit at a desk and work on a computer for several weeks. And tonight, I was finally able to sit and draw at a drafting table. I did two pages I was so excited.

I’m still taking time to rest and recover, but it’s time to get back to work. The world changed overnight, and I forgot to make a big deal about our movie being released. I’m sure like me, all of you have been stunned by the spread of the COVID–19. I hope you are home. I hope you are safe. And I hope you are healthy. I am all three (home, safe,... 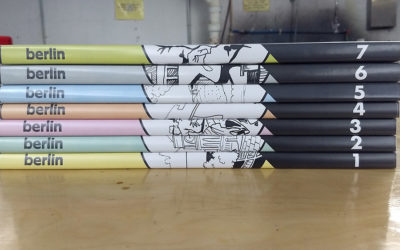